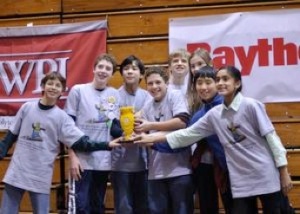 The Battery Powered Picklejar Heads formed as an FLL (First Lego League) team in 2007 for the Power Puzzle challenge.  During the 2008 Climage Connections FLL season, they won the runner up Champion’s Award at the MA State tournament, which earned the team a spot at the World Festival in Atlanta, Georgia. While competing in Atlanta, the Picklejar Heads won the second place robot quality design award. Inspired by their success, the team continued to participate in FLL for the following year’s challenge, Smart Move. The team won numerous awards at the qualifying tournaments, and at the state competition they won the 1st place Champion’s Award.  Unfortunately, Massachusetts did not receive a seed for the World Championship in Atlanta that year, but about a month later, the team found out that it, and five other American teams, had won seeds to an international tournament in Kaohsiung, Taiwan in May of 2010.  The team took the opportunity, and had a great experience at the competition. The event only gave first place awards, so the Picklejar Heads did not receive any at that competition. However, they ranked fourth for robot performance and went home happy with a great three years of FLL behind them, as this was The Battery Powered Picklejar Heads last year as an FLL team.

The Battery Powered Picklejar Heads returned to FIRST for the 2010-2011 season, but as a FIRST Tech Challenge (FTC) team.  In that year, the team went to the MA state competition, although unfortunately they did not do well there.  During the 2011-2012 season, the team again qualified for the state tournament, but although they learned a lot there, the robot still underperformed. However, the team was part of the winning alliance, helping our local high school team, 2 Bits and a Byte, to advance to St. Louis for the World competition.  They return to the competition for the 2012-2013 FTC Ring It Up competition. The went on to win the Inspire award at the State competition, and right now they are preparing to compete in St. Louis for the World competition in April.